These gluten-free Fudgy Ginger Brownies are studded with chocolate chunks and chewy pieces of candied ginger. This is one brownie everyone will love!

Chocolate + ginger is such a winning combination especially when it's in brownie form! These Fudgy Ginger Brownies are the ultimate dessert for anyone who loves this flavor combo.

To make these gluten-free and super easy (read, no need for multiple speciality flours) we're using Bob's Red Mill Gluten Free 1:1 Baking Flour. Guys, I LOVE this flour blend. It bakes up beautifully, evenly, and works 1:1 in most recipes.

For the addition of ginger I decided to mix in some candied ginger pieces into the batter along with a handful of chocolate chunks. After baking I whipped up a quick chocolate ganache icing then topped it all off with more ginger chunks. These little guys are RICH, just the way a good brownie should be. Plus, I like that you can cut them smaller and make them last longer - hello to having brownies in the fridge for an entire week, we all know how that NEVER happens.

These brownies are also dairy-free making them great for various diet types. You can also sub out the egg for a chia egg if needed. 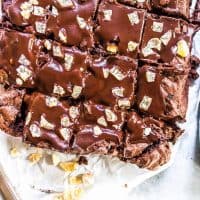 Hi, I'm Liz! On Tasty Treats & Eats you'll find simple, delicious desserts that you can enjoy in no time!